What Effect does Coaching have on Winning the Masters? 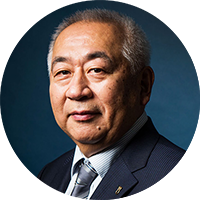 Hideki Matsuyama won the 2021 Masters Tournament. I am a big golf fan, and I was so excited to see his victory while watching his play on TV. Hideki was well-known for not having a coach, which is rare among top athletes, however, he welcomed Hidenori Mezawa as his coach in the second half of last year. This was his first season as a coach. Just as I was keen to see the impact a coach would have on his play, he wins the Masters.
Hideki rarely smiled and often looked nervous during his play in the past, however, his facial expression seemed to be more relaxed throughout the game this time. I wonder if this is also an effect of having a coach.

Hideki was asked about his coach in the interview on the third day of the Masters, and he replied, "I was playing golf on my own too much before, trying to figure out what was right or wrong, and because I went only by my feelings, I would lean too often on the side of thinking I was doing something right. Now, I am moving in the right direction with the objective eye of my coach."

I believe that there were many factors that contributed to his victory, including his own efforts and the support of his caddie, Shota Hayafuji. However, his victory only six months after his coach joined Team Matsuyama, inspired me to rethink about the impact of a coach.

How Does a Coach's Perception of Coaching Determine His or Her Coaching?

Regardless in sports or business, each coach has a different perspective on their role as a coach. How a coach understands coaching and how he or she perceives the purpose of coaching, will determine the actual coaching.

In the interview, Coach Hidenori explained his perception of the role of a coach and coaching as below;

"I believe my role is to be a mirror for Hideki, rather than a golfer's swing coach. Rather than being a checker, I want to be a mediator between him and his victory so that he can achieve what he wants to achieve. Besides, Hideki has the image for his victory and also he knows how to win. Since I am a coach and not an athlete, I do not have the means to win, so I am not going to control that area.

"... As a member of Team Matsuyama, I would like to support Hideki by illuminating the path he is trying to take."

Given the premise that our perception of coaching makes a difference in our actual coaching, we need to broaden and deepen our understanding of coaching in order to evolve it for the better.

How Do We Interpret the Evolving Nature of Coaching?

When I started coaching 20 years ago, my first perception of coaching was;

"Coaching is a form of communication that empowers people to take initiative to achieve their goals."

"Coaching is a process of taking stock of the knowledge, skills, and rules needed to achieve goals, and enabling individuals to acquire them in a tailor made process."
"Coaching is a method of human resource development."
"Coaching is the process of identifying the desired change, focusing on the people and behaviors that will drive that change, knowing the context of the change, and communicating across all of these elements."
"Coaching is regular dialogue sessions between a professional coach and a leader whenever he or she needs to create positive change in management activities within a specific time frame."

In this way, through dialogue with other coaches and by gaining new information about coaching, my perception of coaching has been always evolving..

A Practitioner who Creates the Future through Dialogue

"A coach is an agent for the changing future."

The word "agent" is often translated as "representative, agency," however, it originally means "one who exercises power," or "one who is entrusted, accepts the task and carries it out."
Following that interpretation, Gergen's quote would be;

If I were to put into a few simple words,, my latest perception of the role of a coach is;

"A coach is a practitioner who creates the future through dialogue."

A top athlete fighting a fierce battle against the competition. A top executive trying to achieve goals in an increasingly complex, diverse, and unpredictable environment. It is difficult for both of them to face these challenges alone.

Hideki's victory has brought the focus on the significance of a coach who thinks together and encourages action. It is even more applicable under these unpredictable circumstances during COVID 19, where no one knows what the right answer is and society has become more diverse and complex. Coaching could become one of the most valuable approaches for both organizations and individuals in order to create value in this situation.

What does coaching mean to you?

Is there any comment after reading this article? Result of vote
< Previous Article The Vital Attitude of Co-Responsibility in Perform…
Next Article > How Can Leaders Continue to Learn Beyond Success S…

Kazunori Sakurai holds an M.A. in History from Nihon University. He worked as a history teacher at several public junior high schools in Tokyo, and also has 10 years of experience as a communication skills trainer. Sakurai played a major role in the establishment of Coach 21 Co. Ltd. in 1997, and the Japan Coach Association, a specified non-profit organization, in 2000.